Fleur De Lis is the accompanist and wife of Fancy Pants (Trevor Devall). Her cutie mark is three fleurs-de-lis. She is yet to appear in an episode of EFF Agents.

Fleur De Lis was participating in a fashion show in Canterlot one day, and afterwards Fancy Pants approached her, saying how much he admired her. They became friends later on, dating a few weeks later. They got married after three years of dating. They have a foul named Sugar. 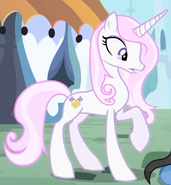 Retrieved from "https://dogkids-wiki-of-wonder.fandom.com/wiki/Fleur_De_Lis?oldid=19065"
Community content is available under CC-BY-SA unless otherwise noted.