"I'll probably be on this floating island forever, guarding the Master Emerald again. I may not know the whole story behind this, but perhaps it's better that way."

Knuckles the Echidna is an EFF agent, making his debut in the episode The Evolution of The EFF part 2. He is usually training his skills on the beach when he's at Kialon island.

He is one of the few Condilion-based agents who doesn't live on Kialon island, but instead resides at Sojuno Desert, being the leader of the post there. He initially worked and lived alone, but after the rising of Thorn, Dogkid insisted Knuckles at least live with one other agent as a safety precaution. Flashbolt volunteered for this position, and at first Knuckles was annoyed by his presence, but soon opened up and became used to him.

In The Evolution of The EFF part 2, Knuckles is rescue by Sonic after being held captive by Doctor Eggman. Eggman also held Tails captive for an unknown reason. After figuring out Eggman abducted the two from Mobius to use them as bait to Sonic, they were at peace, finally knowing why they were sucked from their normal life. Tails and Knuckles joined the EFF to help their friend in saving the world, like they always did, and have been recurring characters.

Knuckles is shown to be particularly close with Applejack, both shown training together on the beach. They enjoy each other's company, being similar in personality, but it is completely platonic.

Knuckles was dating Julie-Su some years before he joined the EFF, but after a few years they broke up. He started dating Rouge some time after, which started a rivalry between her and Julie-Su.

He appears briefly alongside his daughter, Lara-su, and his wife, Rouge. The two are seen in the fighting scenes and are a part of the group captured and taken by Felicity. They are seen at the end shaking hands with Dogkid, receiving their badges confirming they're part of the New EFF.

Knuckles is tough, independent, and a loner by nature. Since he was secluded most of his life with his duty of protecting the Master Emerald, he is antisocial. Because of this, he likes to be alone and is why he chose to live in isolation away from the other agents at Sojuno Desert. He is bluntly honest and frank. He can be stoic, stubborn and inflexible. 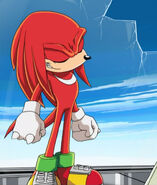 Add a photo to this gallery
Retrieved from "https://dogkids-wiki-of-wonder.fandom.com/wiki/Knuckles_the_Echidna?oldid=18996"
Community content is available under CC-BY-SA unless otherwise noted.