Lara-Su was Knuckles's and Julie-Su's daughter from the alternate future timeline known as Light Mobius. She was initially at odds with her father, who refused to allow her to become a Guardian. Eventually, he relented however, only for that future to be warped almost beyond recognition by an alteration of history from King Sonic. Lara-Su and a few others recalled the rightful timeline, and together fought the despotic King Shadow. Lara-Su herself ended the fight by imprisoning him with Chaos Control. Serving as a Guardian for five years, she also became a member of the Future Freedom Fighters when Shadow returned.

Lara-su is the daughter of Knuckles and Rouge the Bat in EFF Agents the movie 3- 25 years later. She appears as a major character and one of the eight to help Dogkid banish Catkid, the other seven being Yogan, Ribibi, Shine, Lucas, Manik, Lily, and Skye. 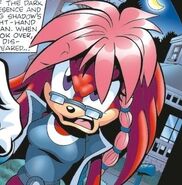 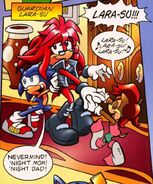 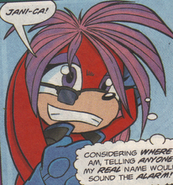 Retrieved from "https://dogkids-wiki-of-wonder.fandom.com/wiki/Lara-su?oldid=17798"
Community content is available under CC-BY-SA unless otherwise noted.