Nico and Pedro first meet Blu when he arrives in Rio de Janeiro. Upon hearing that he's here to meet a girl, they give him some advice on how to attract her. They meet again in a marketplace where Rafael took them to see Luiz. As they meet up, he teases Blu about being chained to Jewel, then he and Pedro take the two blue macaws to a bird's samba club. He starts to sing "Hot Wings (I Wanna Party)" together with Pedro. Suddenly, they were attacked by the marmosets (monkeys). During the fight, he and Nico use grapes to hit the monkeys. Kipo, a Roseate Spoonbill, helps Blu and Jewel escape from some marmosets (that grab Blu and Jewel) by carrying them to the trolley. Nico throws his bottlecap at the lead marmoset, knocking him off. Eventually, they escape onto the trolley and set off to Luiz's garage. 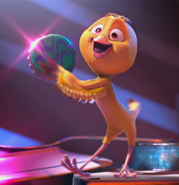 Retrieved from "https://dogkids-wiki-of-wonder.fandom.com/wiki/Nico?oldid=16216"
Community content is available under CC-BY-SA unless otherwise noted.