Scourge the Hedgehog (formerly known as Anti Sonic or Evil Sonic) is an evil version of Sonic the Hedgehog from Moebius. Unlike Sonic, Scourge mistreats others, is selfish and greedy, and has a great desire for power. Originally, Scourge, like all other alternate versions of Sonic Prime, looked identical to him, differing only in personality and attire. All this changed when Scourge, in a failed attempt to steal the Master Emerald with Rouge the Bat, sampled the Emerald's power and was permanently changed. Shortly thereafter, Scourge's methods changed as well: from small time hoodlum and mercenary to a villain determined to carve out his own path and completely distinguish himself from Sonic. For most of his criminal career, he led the Suppression Squad-previously known as the Anti Freedom Fighters-but more recently has become the leader of the Destructix. ( Source: http://archiesonic.wikia.com/wiki/Scourge_the_Hedgehog )

After meeting Catkid2 in the Chaos realm, Scourge ended up having an important role in the EAA, as a council member. He soon gained trust in all of the EAA agents, and he sometimes used them, causing Catkid2 to get mad. In EFF Agents the movie 3- 25 years later, he appears to not be in the EAA anymore, but his two children are. It is unknown why Scourge isn't in the EAA anymore. 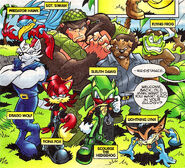 Scourge along with Fiona and the Destructix. 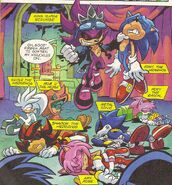 Super Scourge over his defeated enemies.

Scourge introduces himself as the King of Moebius.

Add a photo to this gallery
Retrieved from "https://dogkids-wiki-of-wonder.fandom.com/wiki/Scourge_the_Hedgehog?oldid=16312"
Community content is available under CC-BY-SA unless otherwise noted.