Dogkid's wiki of wonder Wiki
Register
Don't have an account?
Sign In
in: Heroes, EFF, Ponies,
and 4 more

Back to page
View source

"We've learned that friendship isn't always easy. But there's no doubt it's worth fighting for."
-Twilight Sparkle

Twilight Sparkle is an alicorn, originally unicorn, pony and the main character of My Little Pony Friendship is Magic. After the events of the first episode, she moves from Canterlot to Ponyville in order to continue the study of friendship under Princess Celestia's guidance, and regularly maintains correspondence with the Princess. She lives at the Golden Oaks Library along with her assistant Spike and her pet owl Owlowiscious. She has an older brother named Shining Armor, who is introduced in the 2-part finale of season 2.

She is Dogkid's libary owner and assistant and a part of the EFF. In the EFF Agents episode Surprise Guests, she begins to have weird feelings towards Dr. Whooves. It is unknown if she sees him as a brother or a romantic interest.

She appears in EFF Agents the movie 3- 25 years later as a major character, as the mother of Shine and the wife of Orion. Orion and Shine join the New EFF, but however, Twilight does not as Princess Celestia crowned the entire mane 6 as her assistants and royal students, thus making Twilight too busy to join the New EFF. She appears as a grown alicorn like Celestia and Luna. 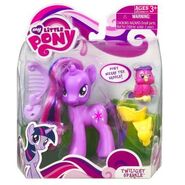 Twilight about to transform into an alicorn.

Twilight turning into an alicorn.