NO, I Hate Club penguin now. I love MLP now.

This is why CP WIKI HAS NO PEACE With MLP Wiki and this Wiki.

What Pinkie said!
Add a photo to this gallery 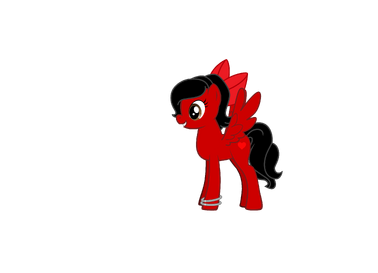 - my pony form, also called Heart Hooves or Red Hearthooves, but she is deaf (Just like me in Real life) in her childhood (or in MLP's case, Foalhood). She also went to a school for deaf pony called Lexinghoof school for the deaf (It is pony equivalent of my real life school, Lexington school for the deaf). while not known exactly where she lives with, it is evidenced that She may be lived with her Grandparents and her own natural father (which he was not affected by the nuke which can reverse Genders of everyone) in manehatten.

The Origins of MLP FiM show

but as stated in a comic that issued the origin of MLP FiM: alternate universe where world war III occurred in real life after My little pony friendship is magic was cancelled by The Hub, so-called Anti-Bronies rejoiced happily until it made Bronies mad, The war began. the comic narrated the origin of Heart hooves or Red Hearthooves as a result of me turning into a pony after the nuke which contained an Green water-like Liquid (Which Everyone in original boys and Girls form get their Gender-reversed). Soon I was reborn as Heart hooves or Red hearthooves (I was called Heart hooves in that comic at that time)... Thus MLP FiM began as a show on every TVs!

Retrieved from "https://dogkids-wiki-of-wonder.fandom.com/wiki/User:Kirlia_the_Pok%C3%A9mon?oldid=13669"
Community content is available under CC-BY-SA unless otherwise noted.